On Tuesday, GameStop stock closed at $147.98 after selling at $18.47 near the end of 2020. GameStop stock is now over $220.00. This sudden rise in stock prices is attributed to a group of Redditors called the r/WallStreetBets. According to William LeGate, Bitcoin holder since 2013 and CEO of PredIQ (a decentralized prediction market), this group’s actions were “driven by the resentment the vast majority of Americans hold towards Wall Street & the banking system as a whole.” These sentiments align with Bitcoin’s original purpose, as “BTC was a technological achievement meant to solve double-spending on peer-to-peer digital cash networks.”

Michael Burry, a large GameStop investor, and others point out the imbalance of the system asking: “Is pumping up an asset’s price only legal when Wall Street traders do it?” LeGate surmises that “[the bankers] won’t like that the ‘wrong people’ are manipulating the markets and will lobby the SEC to take action against retail investors.” When this happens, he suggests that these GameStop investors turn to Bitcoin to be able to continue making a profit while aggravating Wall Street. 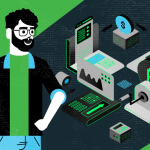